Auro Chocolates, a proudly Filipino bean-to-bar chocolate company, is on a mission to churn out more than world-class sweets. It has constantly strived to improve the standard of living of local farming communities in Davao, where it source its cocoa beans. 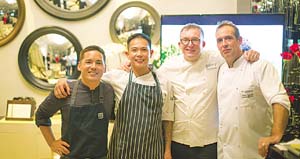 The chocolate company recently held a chocolate-infused benefit dinner at the Peninsula Manila. “The farmers are actually the ones who will stand to benefit from this dinner. It is a group of farmers who used to be Marines but they retired and have decided to create a community of farmers to support their comrades by comrades, I mean, their farming communities. So basically, it consists of retired Marines, widows, housewives and their children, as well,” Auro Chocolate Managing Director Mark Ocampo shared.

The elegant dinner started with four kinds of amuse bouche, which each one having a touch of chocolate-baby beets, chicken choux, cocoa-dusted toast and goat cheese “cheesecake.” The bite-sized treats have successfully whetted not only the appetite but the imagination of the diners, as well, of what is to come.

The appetizer, made by Chele Gonzales of Gallery Vask, was Mahi and Mole. The tasty mole complemented well the mildly sweet taste of the fish. Upo seeds, on the other hand, which looked like pinipig, added a nice crunchy texture while the grilled coriander provided a clean herby taste to the dish. 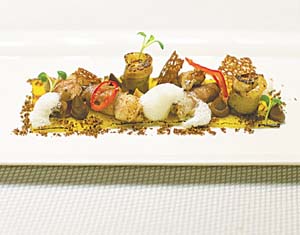 The entrée of Cinnamon Chocolate Duck Breast was masterminded by Allan Briones of Old Manila. This dish, garnished with charred pineapple, cashew mousseline and toasted coconuts hinted that Christmas is just around the corner with its pineapple and smoky ham-like taste.

The main course of Beef with Cacao and Hibiscus was the brainchild of Josh Boutwood of the Test Kitchen. The slow-poached beef short rib cooked in cacao butter, which had a very beefy flavor, paired exceedingly well with Cabernet Sauvignon.

The four kinds of desserts, made by Xavier Castello of the Peninsula Manila, were a feast for the eyes with its creative execution. The “Flower” (white-chocolate mousel, raspberry compote, ivory petals) was a dessert blooming with realism its painstakingly assembled chocolate petals. Buko looked liked a golf ball-sized coconut, but when sliced, resembles the look of a hard-boiled egg inside. It had a foamy texture inside that bring to mind Brazo de Mercedez. “Jewel,” on the other hand, is like an adult version of gelatin as it was made with sweet wine jelly served in a miniature martini glass. This dessert made of wine jelly and named Jewel was one sparkling treat, indeed. Petits Four was made from white chocolates created to resemble cocoa pods. It revealed homemade pralines when cracked open. All the desserts were big in the element of surprise. They revealed so much more than meets the eye once once tasted/opened.

“The proceeds of the dinner will go to help them [the farmers] build proper postharvest facilities, solar driers, fermentation boxes and the same time to be able to take care of the trees and to purchase fertilizers as well. In order to turn local beans in quality chocolate, fermentation and drying is a necessity. It is actually one of the most crucial stages in flavor development so without the process of fermentation and drying, you would not be able to produce high-quality chocolates,” Ocampo elaborated.

It is said that eating chocolates creates a kind of feeling in the brain synonymous to that of happiness and falling in love, one can only imagine the feeling generated from partaking of this chocolate-infused multicourse meal. It was plate after plate of superb interaction of flavors and textures from the well-respected chefs who are worth their weight in gold.